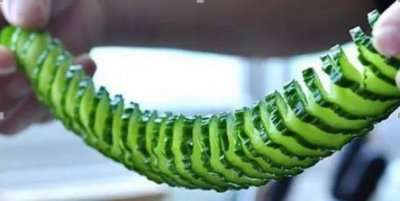 Deciding on the level of cooking skills of a Chinese chef, knife skills account for 70%. Skilled knife jobs are the basic skills that a good chef must possess. Chinese chefs can use a single knife to make a variety of foods into the desired shape, while the knife also gives Chinese cooking an artistic beauty.

(l) Straight cuttng: The right-hand uses the knife when  the left-hand is pressing the ingredients.The knife is perpendicular to the cutting board when cutting.The ingredients which Generally used for straight cutting such as: green bamboo shoots, fresh scallions, radishes, cucumbers, cabbage, potatoes, etc.ting.Pushing the knife and cutting from the back to the front. The force is placed at the back of the knife. The main ingredients for this way such as pork, cooked eggs and so on.

The cutting method is the more basic knife in the cutting of the cooking. Cutting is a method in which the blade body is perpendicular to the ingredients, and the knife is fed rhythmically, so that the raw materials are equally disconnected.It can be divided into six methods: straight cutting, push cutting, pull cutting, saw cutting, cutting of straw cutter, and rolling cutting.

(3) Pull cutting: The knife is perpendicular to the ingredients When cutting.Pushing the knife and cutting from the front to the back. The force is placed at the front of the knife. This method and push cutting are similar,but the foice is different.The way is suitable for raw materials with strong toughness, such as kelp, fresh meat, etc.

(4) Saw cutting:The sawing knife method is a combination of the push cutting and the pull cutting. Saw cutting is a difficult method to master. The knife is perpendicular to the ingredient when cutting, the knife is pushed forward and then pulled back. In this way, the push-pull is cut like a saw to cut the materials. The sawing method is generally used to cut a thick, boneless and tough material or a soft material into a thin sheet shape, such as a piece of mutton meat.

(6) Roll cutting: Press the ingredient in the left hand, and the-right hand cut down.Each time when the knife is cutting, the raw material is rolled once. Roll cutting is mostly used for round or oval brittle vegetable materials, such as radish, green bamboo shoots, cucumber, and white.

The blade is leveled when cutting. For the different ingredients there are push slicing, pull slicing,oblique  slicing,everse slicing,saw slicing and tremble slicing methods.

When holding the ingredients with your left hand, cut the dish with your right hand.The blade body and the vegetable jack face are approximately parallel when cutting.The knife is inserted from the right side of the material and pushed to the left. Control the thickness of the materials with the height of the knife.Pushing slicing are mostly used for as cooked bamboo shoots, magnolia slices, dried tofu, and frozen meat.

This method is basically the same as the pushing slicing, except that the knife blade
moves in the opposite direction after entering the material. Pulling blades are
mostly used for tough materials such as chicken, fish fillets, shrimp slices,
and meat slices

(3) Oblique slicing: When holding the left part of the ingredients with your left-hand, cut the dish with your right-hand.  The back of the knife is lifted, the blade is to the left with the angle slightly inclined, the knife is fed into the material, and moved it from the left side of the material surface to the lower left. It is commonly used for texture crispy materials Such as sea cucumber tablets, chicken slices, fish fillets, cooked belly slices, waist slices, etc.

(5) Saw slicing: The saw slicing is a comination knife skill technology of pushing and pulling. When applying the knife, first push the film, then pull the film, so that the knife will work all the time. It is a knife technique for special (no tendons or fewer tendons) lean meat and ridge-like raw materials. Such as chicken silk, shredded pork, is the first use of saw slicing method, the meat into a large slice, and then shred.

(6) Tremble slicing:The right-hand uses the knife when  the left-hand is pressing the raw material. Flatten the blade and move it from right to left after the piece is fed into the material. When moving, the blade should be shaken up and down, and it should be evenly shaken.This kind of knife skill puts the raw material into a water-like sheet or sawtooth.The method is used for ingredients such as pine egg slices, skin jelly, dried tofu and the etc.

It is generally used for boneless raw materials. It is a method of kneading raw materials into velvet, mud or mash.Depending on the amount of raw materials, it is decided to use double knives or single knives. The trick is to use the power of the wrist, from left to right,then right to left, repeatedly squatting.At the same time, the raw materials should be constantly flipped.It is used for boneless chicken, duck, fish, rabbit, pork ribs, trotters and other ingredients.

It  can be divided into two types: straight splitting and follow splitting.

(1) Straight splitting:Hold the handle with your right hand, lift the knife high, aim at the part where
the raw material is to be rubbed, use the force of the arm to force it straight down, and cut it off. It is commonly used for raw materials with bones or textures, such as ham, salted pork, pig head, fish head, pork ribs and so on.

(2) Follow splitting:Insert the blade first in the area where the raw ingredient is to be rubbed, hold the handle with the right hand, lift ingredients and up high knife with left-hand at the same time , and squat down hard, the left-hand leaving the knife when the knife is under the arm。

Flatten the knife, slap the ingredient with force, make the raw material crush and smooth the raw materials. You can make the garlic cloves and fresh ginger to pieces in this way. You can also use the method to make the meat not slippery.

The surface of the raw material is marked with a deep and transparent cross-section of various knives. After cooking, the raw materials can be curled into various shapes such as  wheat ears, chrysanthemums, magnolia, lychee, walnuts, fish gills, robes, wooden combs and other shapes.It is used for brittle and unreinforced ingredients such as pig, sheep, cattle, kidney, pig belly, chicken, duck, squid, etc.