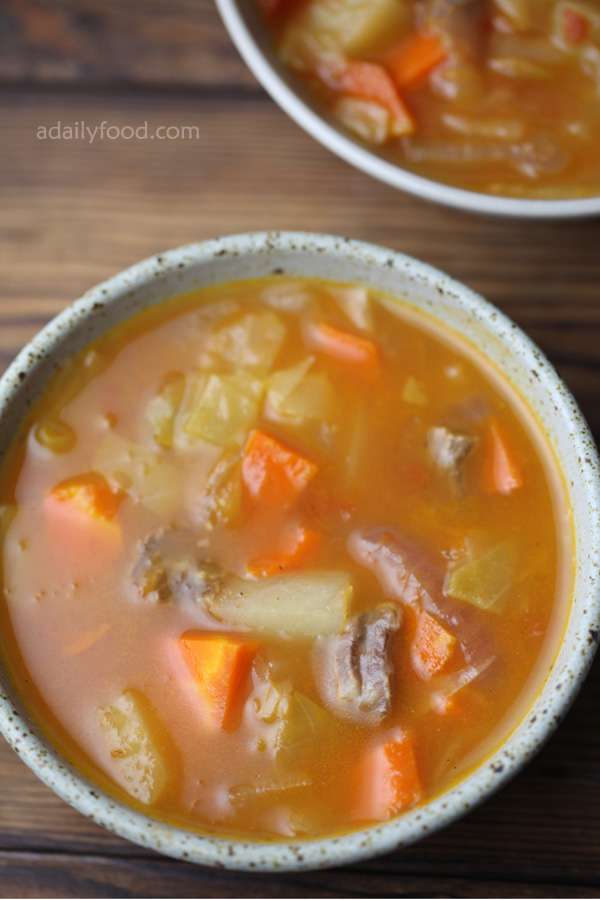 Today’s Shanghai-Style Red Vegetable Soup(Luo Song Tang) which was brought to Shanghai of China by the Russians in 19th century did not originate in China. After the improvement of the people of Shanghai, we get this version. I think every kitchen will make a different taste.Adding more ingredients or  whichever ingredient you like, getting a bowl of soup you love is the ultimate goal.

The rich flavor of Luo Song Tang is what attracts me the most, not only because of the variety of vegetables, but beef soup is its soul. With this beef soup, the original taste of vegetables is more prominent. With the sourness of tomatoes, your appetite will also open up.

It takes at least 2 hours to boil the beef broth on low heat, and the broth will be reduced. In need of a time-saving modern kitchen, the pressure cooker helped a lot. Just put the beef and water in, after 45 minutes, the beef is cooked and the soup is still so much.

Which part of the beef

The authentic version uses sirloin which has a little fat, makes the bite more chewy and the richer beef broth. But I only have beef tenderloi in my refrigerator.

How many kinds of vegetables

What to pair with the soup

The traditional version is bread which is the Russian’s staple food. For Chinese, a variety of wheaten food or rice is also a nice match.

After trying a few times, I think adding tomato sauce and black pepper powder is necessary before eating, which will make the soup more delicious.