The fire of Chinese cooking

In the Chinese kitchen, the fire has the same status as the knife skill. An experienced chef knows the nature of the ingredients and then uses the corresponding fire to bring the taste and appearance of the dishes to the standard.

The use of firepower during cooking should be determined according to the nature of the raw materials, but it is not absolute. Some dishes use two or more fires depending on cooking requirements.

The following factors are worth noting in applying and mastering the fire.

1. The relationship between fire and ingredients

Soft, tender, and fragile ingredients are often used in a big fire, and hard, tough ingredients are often cooked with a small fire for a long time. However, if the texture and characteristics of the ingredients are changed through preliminary processing before cooking, the use of fire should also be changed. If the raw materials have been shredded, oiled, parboiled, etc., the cooking time can be shortened.

Generally speaking, the ingredients with a large overall shape is in cooking, and because of the small heating area, it takes a long time to mature, so the firepower should not be too prosperous.

The ingredients with small shape can be matured due to its large heating area.

3. The relationship between fire and cooking methods, Cooking methods are closely related to the use of fire. Cooking methods such as stir-fry deep-fry are often used in big fire. Stewing, boiling, simmering use small fire for a long time to cook.

[Big Fire] is one of the strongest firepowers.  It can reduce the loss of nutrients in the heating time of the dishes, and keep the raw ingredients fresh and crisp. It is suitable for cooking methods such as stir-frying, steaming, etc.

[Middle fire] is also called simmer, has a large heat. It is suitable for boiling, stir-frying.

[small fire] is also called slow fire, warm fire and so on. This fire has a small flame and weak firepower, which is suitable for cooking methods such as frying.

[Micro-Fire] The heat of the micro-fire is small, and it is generally used for cooking dishes such as stews.

Give examples of the following dishes for fire:

mainly cooked on low heat. Cut the beef into square pieces before cooking, and simmer it with boiling water to remove blood foam and impurities. At this time, the fiber of the beef is in the contraction stage. It is necessary to move it on the medium fire,  cook for a while, then move it on a small fire, and cook it through a small fire to gradually stretch the fiber contracted by the beef. When the beef is cooked quickly, add the seasoning and cook until cooked. Then cooked beef is good in color and flavor. If you cook with a fire, the beef will appear irregular. In addition, there will be a lot of beef slag in the soup, which will make the broth turbid. The surface is cooked and still chewy.

The ingredient is prepared by boiling in a pot, frying a hard outer shell, and then moving them into a medium heat to fry.

When drowning, it must be boiled out, so that it will be crisp and tender. The reason is that the dishes cooked by the fire can make the main material quickly subject to high temperature, and the fiber shrinks sharply, so that the moisture in the stomach is not easily leached, and it is crisp when eaten.

First of all, cut the meat to be cut, use the top knife method to cut the meat into thin slices, and then must use the big fire, the oil should be hot. The wok is set on the big fire, the oil is burned until the fumes are smoked, and then the meat is stir-fried until it is discolored. Immediately add the onion and seasoning, stir fry for several seconds, see the onion discoloration immediately. It’s also going to be quick, otherwise the dish will contain too much water and be too hard. 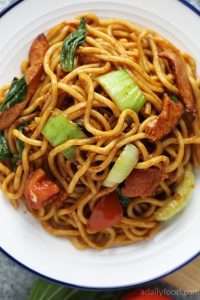